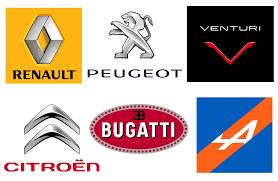 French Car Brands. Oui! Today, I will talk about French car brands and their logos because these vehicles are now among the most popular and highest-selling ones in the European markets.

A recent survey showed that French cars occupy around 25% of the European marketplace. And why wouldn’t they? Just like the French people, their cars also bear the symbol of classiness, elegance, luxury, beauty, and originality.

The first car with an internal combustion engine came out in 1883. It was the first of such a model, even though mass production never happened during that time.

But this country’s automotive industry’s journey hasn’t been easy. Yet, like every other situation, the industry began to shine and had been the 4th largest automobile selling country since the Second World War Until 2000. Still, it is one of the largest car manufacturing countries, with about 5.5 million car production each year.

French Car Brands. There are many active and inactive French car brands. But not all of them got to steal the limelight or earn worldwide fame. I have made a list of 13 famous car brands that changed France’s automobile industry’s history.

Bugatti is the name of a French luxury car brand. An Italian-born French designer named Ettore Bugatti founded the company in 1909, and it is one of the oldest automotive brands in the country. And as you can tell, the company got its name from him.

Ettore Bugatti was not alone in this. His son, Jean Bugatti, was behind the designs and test-driving of many models the brand created. The Model 35 was the first model with aluminum spoke wheels.

This brand’s sports cars became famous worldwide because of their powerful performance and incredible design. Unfortunately, Jean died in 1939, at the age of 30, and the company lost a part of its charm. Then Ettore Bugatti’s death in 1947 brought an end to the Bugatti brand for that time.

After the brand’s founders’ and owners’ death, the company appeared at the Paris Motor Show in 1952 but ceased operation afterward. Then the famous German brand Volkswagen purchased Bugatti and revived it.

The red logo of Bugatti represents power, passion, and the driver’s pleasure. The cars are pretty expensive, but they ensure a rich experience for those who drive them.

The Peugeot car brand is older than the famous Bugatti brand and the oldest French car brand. It was founded in 1810 by Armand Peugeot. And at the beginning, the company made hand tools and kitchen equipment, but then moved to saw blades and bicycles.

The Peugeot brothers designed the first car with an internal combustion engine. And then, the brand evolved more and more and became the legendary French car brand. Now, it is the second-largest automaker in Europe, right behind Volkswagen.

In 1976, Peugeot took over another French car brand, Citroen, when it was almost going bankrupt. And now, the joint venture of Peugeot and Citroen is known as the PSA Peugeot Citroen.

The lion on the brand’s logo represents power, superiority, and high speed. From the beginning, the brand logo was of a lion’s body standing in two feet and has the forelegs raised. But the logo was recently changed to a lion’s head from sideways on a black shield. The new logo marks the new electronic car era of the brand.

So this is what I was talking about a moment ago, the brand that Peugeot saved. This brand is known for manufacturing robust cars with incredible design and color. You are even bound to like the tire designs of Citroën cars.

Andre Citroen, a French industrialist, founded the company in 1919. By the end of that year, the brand’s first car called the 1,327 cc Type A came out. Citroen gained popularity for manufacturing a vast number of affordable cars for off-road and military use.

Between 1925 and 1934, the brand became one of France’s powerful names and even had its sign on the Eiffel Tower, which was the world’s largest advertising sign. But in 1974, the company was on the verge of going bankrupt, but the famous Peugeot brand stepped in.

Now, these two brands work together as the PSA Peugeot Citroen. And under this company’s name, Citroen has been manufacturing cars, sedans, minivans, and even electric cars.

Three Renault brothers, Louis, Marcel, and Fernand founded this famous car brand. But it was Louis who was the first to think of starting an automotive brand.

He was an industrialist and engineer and had a passion for this type of profession. His brothers Marcel and Fernand founded the brand in 1899, and Louis worked as an employee as a designer. And their company was named the Renault Frères Trois or the Three Renault Brothers.

The affordability of Renault cars made them famous worldwide, and the brand began selling the cars in 120 countries. And the selling figure is around 2.5 million cars every year. Today, it is one of the most famous car brands and one of the top fives in France.

Jean Rédélé used to be the youngest Renault dealer. But he later decided to start his own car manufacturing company, and that is how he founded Alpine in 1955. The name Alpine came from the founder’s racing success and the road he raced on.

The company is not among the widely known ones globally but got popularity for its sports and racing cars. And since Jean Rédélé worked with Renault, his company got to work closely with his former employer and used their engines, and even got financial support.

Things were going well for the brand until the petrol crisis came in 1973. Alpine began to lose its sales number. But fortunately. Renault came to the rescue, and the brand was relaunched in 2014.

The DS Automobiles is a reputed car brand that operates under the Citroën brand. After its immense success, Citroën wanted to start a different brand that would manufacture premium-quality electric cars. And that is how DS began its journey in 2009.

But in 2015, DS Automobile became a standalone car manufacturing company. And now that Citroën is a part of the PSA Peugeot Citroen brand, DS is slowly separating itself from this brand to operate as a different brand. The company now develops world-class luxury cars.

As for the brand’s logo, it contains D and S together, which is pronounced as deesse in French, meaning Goddess. Some also say that DS is the abbreviation for Different Spirit or Distinctive Series.

The Aixam brand would probably not happen if it was not for Arola. Arola was another car manufacturing brand that founded Aixam in 1983.

This car brand became known for its microcars and other compact vehicles and introduced its first car in 1984. The car model was called 325D.

And the brand kept on establishing after releasing the car. The brand became so popular that it even appeared in the British International Motor Show.

Now, Aixam operates under two brands, Aixam and Mega. And together, it is known as the Aixam-Mega car manufacturing brand and makes subcompact vehicles. The perk of using these cars is that people with no driving license can drive.

As the name suggests, it is one of the French car brands that manufactures microcars. But before microcars, the company was a division under the Bénéteau Group and made sailboats. But in 2000, it joined the automobile manufacturing industry.

Over the next few years, Microcar emerged as a successful brand by manufacturing compact cars with excellent performance. The brand is also the largest quadricycles maker in France. And you can drive these cars without having a driving license.

In 2008, Ligier Automobiles took over the Microcar automotive brand. But despite that, both brands operate separately as individual car manufacturing companies.

The reason Ligier and Microcar began working together is because of their car design similarities. Both companies manufacture unique, compact, and well-performing microcars.

Ligier was named and founded by Guy Ligier in 1968. He was a racing car driver and a former rugby player. His company Ligier introduced its first car in 1971, and the car was Ligier JS2. From then on, this company began to manufacture sports, racing cars, and passenger cars.

During the late 90s, Ligier vehicles gained popularity across France. The downside of these compact cars is that they are not high-speed cars. But they are the perfect kind of cars to maneuver through narrow streets.

Two French engineers, Claude Poiraud and Gérard Godefro, wanted to present special cars in the Grand Tourisme to compete alongside reputed cars from Ferrari or Aston Martin. Thus, in 1984, they founded a brand and named it Ventury, with the letter y at the end.

The company focused on manufacturing luxury cars and took part in several world competitions. But things didn’t go too well because the brand went bankrupt in 2000.

Then in 2001, a millionaire named Gildo Pallanca Pastor acquired Venturi. Under his direction, the brand now focuses on manufacturing electric cars. The brand’s latest famous models are the Fetish and Eclectic.

Established as Panhard et Levassor, this company began its journey in 1891 by René Panhard, Émile Levassor. It was one of the first French car brands that manufacture cars with internal combustion engines.

And the first launched models by this brand were basically military and other light vehicles. Some popular models during that time were the Levassor Dynamic, DB LE Mans, Panhard HBR, Panhard 24, etc.

However, the last passenger car the company made came out in 1967. And now, the brand continues to manufacture military vehicles and equipment.

When automobile nerds start automobile brands, you can only expect the best. And that is exactly what the Prevot brothers did.

The three brothers, Patrick, Gilles, and Olivier Prevot, were car fans. Their shared passion made them start a car manufacturing brand.

They took the first letter from their first names and introduced PGO in 1985. In the beginning, the company only made replica models of famous cars.

But soon, it started making cars with its own design. The brand’s two-seaters retro-styled models immediately became popular.

In 2005, Al-Sayer International bought the company. And under its ownership, the famous PGO car model Hemera came out in 2008.

Without this honorary mention, I could not finish talking about the French car brand. Finally, I listed the Berliet car brand even though it no longer exists.

The company was founded by Marius Berliet in 1899 and evolved pretty fast. It began by manufacturing single-cylinder cars. But by the 1900s, the company moved to make double-cylinder models.

And it was not long before Berliet began manufacturing four-cylinder cars with steel chassis frames instead of wood. Then in 1906, Marius Berliet sold his car manufacturing rights to the American Locomotive Company. However, by 1980, the company was closed down due to financial difficulty and bankruptcy.

The variety in French car brands is absolutely mesmerizing. These brands have been working on upgrading their vehicles and their features to make them more accessible and efficient.

No wonder France is one of the 10 highest car sales and one of the largest car manufacturing countries in the world. So in case you are looking forward to getting a French brand car, you have plenty of options to choose from and decide.

17 Most Popular European Car Brands And Their Logos