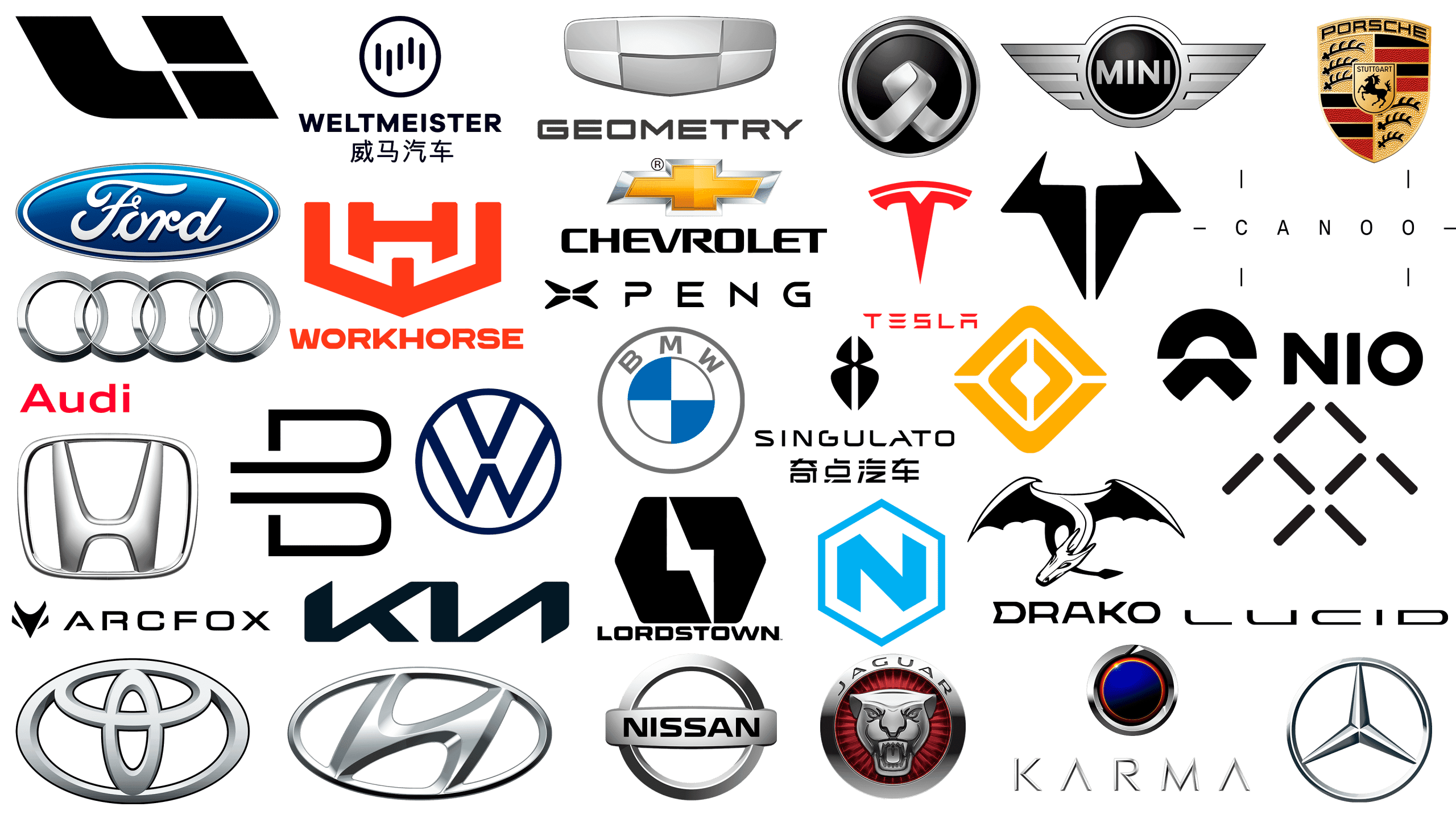 No matter which part of our lives we are talking about, in this modern world, you can know for sure that it got touched by the magic of electricity.

7 Most Popular Electric Car Brands. The world of transportation is not any different in this regard. This is evident by how fast the industry of electric cars is growing.

With the high demand and ever-increasing interest of people in electric vehicles, more and more car manufacturers have started to produce and sell electric cars.

Some of the world’s most renowned electric car brands are Tesla, BMW, Kia, Nissan, Ford, Volkswagen, and Chevrolet, to name a few.

So, are you thinking about which electric car brand to invest in?

Or are you just interested to know a bit more about this fast-growing industry?

Well, whatever your answer is, you are in the right place. Read this article and find out about some renowned electric car brands which just might end up shaping the future of travel.

Why Are Electric Cars Getting So Popular?

With each passing day, electric cars are gaining more and more popularity and market share. In fact, according to Forbes, Electronic Vehicles sales made up 5.6% of the total auto market in Q2 of 2022. In Q2 of 2021, it was only 2.7%.

That’s why before discussing various electric car brands, I believe it would be nice to know why electronic cars are getting so popular.

One of the main reasons behind the fast growth of electric cars in popularity lies in mankind’s quest for a better environment. It is no secret that our environment is deteriorating. Therefore, people are switching to electric vehicles because they provide cleaner energy as well as offer better performance.

Normally, gasoline-powered vehicles can only convert 12-30% of the energy stored in the gasoline into kinetic power. Electric vehicles, on the other hand, can convert over 77% of the electric energy into power. So, it is clear that when it comes to energy and cost, electric cars are far more efficient than conventional cars.

Ask any owner of electric cars, and they will tell you how improved the performance quality of the electric car is. Electric cars offer you a far smoother ride than a conventional car. Moreover, electric cars come with more limited maintenance requirements, which is always a welcome benefit.

The world is changing. Car manufacturing companies are changing along with it. It is no wonder the electric car manufacturing industry considers battery-powered vehicles to be the future of worldwide driving.

So, let us not waste any more time. Let’s find out which electric car brands are paving this path to the future.

If you have even the minimum knowledge of electric cars and their brands, you already know about Elon Musk (the largest shareholder of the company) and his brand, Tesla. This innovative technology company of Elon Musk is well known for its cutting-edge and top-quality vehicle production. They are notable for having creative high-end features.

So far, Tesla’s most popular car models have been the Model Y, which is followed by the Model 3, and later the Model S. The Model S is the luxury sedan of Tesla. The Model 3 is also a sedan, but it is basically a low-cost option of the Model S for those who don’t want to invest in a luxury vehicle.

There is also the Model X, which is the electrical SUV of Tesla. It has room for 7 passengers, and it features falcon wing doors. It has a range of 300 miles per charge. Tesla Cybertruck and Tesla Semi are not yet released, but they are two highly anticipated Tesla line-ups.

One of the best things about Tesla and the reason why it is so popular is that it offers a good balance between an affordable price and having a long range. Besides these, Tesla’s fuel cost savings, lack of dealerships, and supercharging stations are just some of the reasons for its popularity.

In July 2003, Martin Eberhard and Marc Tarpenning established Tesla Motors. The brand’s name is a tribute to the inventor and electrical engineer Nikola Tesla. In October 2021, Tesla became the sixth company in American history to have a market value of $1 trillion.

BMW is a luxurious German car manufacturing company. BMW entered the electric car market in a major way in 2013 with the launch of the car, BMW i3. The i3 concept model was displayed at the 2009 Frankfurt Motor Show. In September 2013, BMW started the retail products for the BMW i3 series.

The first retail shipments went to Germany. In June 2014, the BMW i8 was launched in Germany. The largest markets for both models are the US, Norway, Germany, and the UK. They are a steadily growing brand in the world of electric cars. BMW recently introduced their BMW i4, BMW iX, and a large SUV.

Among all these models, the BMW iX is by far their best one. It is easily the best luxury electric SUV car available in the market. It has a pretty impressive range as well. It can go as far as 300 miles on a full charge.

However, BMW is an old company with a rich history in the car manufacturing industry. Even before they started manufacturing electric cars, they were popular among their consumer for producing high-quality luxury cars.

Kia, a South Korean car company, is the 2nd largest automobile manufacturer in south Korea. In March 2021, Kia launched its first electric car with the Kia EV6. It is a small, battery-operated crossover SUV.

However, with over 26,000 sales in the US in 2021 alone, the Kia Niro is this company’s most popular electric car model. It has a range of 239 miles per charge on average. The Kia Niro crossover is a practical and cost-effective option for customers.

The Kia Niro is an electrification-focused vehicle. There are three versions of it available in the market, such as hybrid, plug-in hybrid, and battery electric variant. In the upcoming years, customers can anticipate seeing more production of electric cars by Kia. The Kia company has declared their intentions to introduce six more electric cars before 2025.

One thing that sets Lia apart from all its competitors is its warranty service. In contrast to many other electronic car manufacturers, Kia offers a better warranty on their vehicles. Battery replacement is covered by Kia’s warranties, as well as bumper-to-bumper coverage.

Nissan is a Japanese multinational car manufacturing company. Nissan launched their first electric car in 2009 with their Nissan Leaf. The car was first launched in Japan, followed by the United States of America in 2010, and later in various European Countries and Canada in 2011.

The 2023 Ariya is expected to be Nissan’s second all-electric vehicle. It has the same degree of quality as the previous Nissan Leaf model. It is an SUV with 304 miles of driving range. Both Nissan Leaf and 2023 Ariya models are cheaper than other electric cars available in the marketplace.

Ford is an American car manufacturing company. They have manufactured a wide range of cars, from pickup trucks to plug-in hybrids. These cars are delivered for sale all around the world. When it comes to the world of electric cars, Ford is kind of an old player here.

Ford has always wanted to be a pioneer in the field of electric vehicles. Over the years, Ford manufactured many plug-in car models, a few production models, and a number of gas-electric hybrids. However, the company’s electric vehicle projects are mostly unfinished.

The Ford Ranger EV was the company’s first fully electric car production. This is a battery-powered small pickup truck. It was manufactured from the year 1998 through 2002, when it was no longer in production. Their second all-electric car was Ford Focus Electric. It was a 5-door hatchback electric car.

However, the most popular electric car of Ford today is the Ford Mustang Mach-E. Along with that, Ford’s most recent, eagerly anticipated release is the F-150 Lightning. This electric car has a minimum range of roughly 230 miles and can go an additional 100 miles with add-ons.

Ford has filed patent applications for an add-on range extender that would increase the number of miles between charges.

Like BMW, Volkswagen is also a German car manufacturing company. The name, interestingly, means “people’s car”. Volkswagen is most notably known for its VW Beetle. The biggest market for Volkswagen is China. They make up almost 40% of this company’s sales and profit.

Volkswagens are one of the most popular electric car brands out there. And there is enough reason for this popularity. Apart from the classic vehicles like the VW Beetle, many Volkswagen customers stick with the brand year after year because of the several other high-quality features offered by the company.

Compared to other electric car manufacturers, Volkswagen’s line of electric vehicles, including the ID.4, stands out for its size and safety features. At present, Volkswagen has a number of models ready in a line-up for releases, such as the ID.4, and ID.5, among others.

A subsidiary company of Volkswagen is Porsche. Porsche also offers a selection of electronic cars available for customers. The luxurious electric car Porsche Taycan is among them.

Chevrolet is a part of an American automobile manufacturing company named General Motors. They usually sell a large number of cars all over the world. The Chevrolet Bolt is the debut of Chevrolet in the market of all-electric vehicles.

When compared to other long-range vehicles, like Tesla’s current line-up, the Chevrolet Bolt offers a range of 2520 miles per charge. And they do it at a price that is far lower. Moreover, there is also the brand-new electric utility vehicle, Chevy Bolt EUV.

Besides, the Chevrolet Bolt will be joined by other quite popular Chevrolet vehicles, such as the Equinox, Blazer, and Silverado in the EV race by 2023. General Motors made a pretty bold commitment, saying that they will switch to all-electric vehicles by 2035.

Manufacturers around the world are trying their best to make electric cars available to all people at an affordable price. They are also trying to make the cars of the existing brands better in quality and performance. All these will take time. But one thing is certain, sooner or later, electric cars will become commonplace transportation.

How much you learn ? Lets us comment. Don’t forget to share with your friend. Stay with us.

17 Most Popular European Car Brands And Their Logos.